We were now near noon and my belly growled accordingly, almost in unison with Aron’s. She bent her neck towards me, looking for an indication, an order to go back.

A red shadow crossed our path, leaving the tall grass, bouncing on my pokémon’s back and landing in front of her. It was a wild mienfoo, a defiant one.

The opponent was agitated but steadfast, avoiding attacks easily, at least for a little while. Aron did not give in to the frustration and struck accurately, dealing massive damage with a “Rock Tomb”.

Wild but not impatient, mienfoo continued to dodge and dance around my pokémon, avoiding damage as best it could, that is until my pokémon managed to inflict a second and final wave of damage. Mienfoo fell to the ground and started to evaporate. 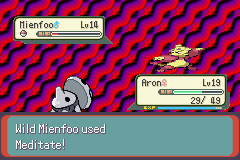 Aron approached and snuggled my leg, her metal coating cold to the touch, as cold as the metal on my pokénav, which had just sounded off, indicating an increase in experience.

My ally had just turned level twenty and that meant one thing, I was now ready to take the next step and face a new gym.